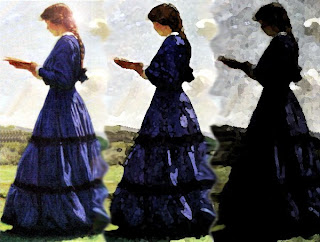 Pure, nobel, sweet-voiced, gentle.  Loving, tender-hearted, sympathetic, loyal - to God and others.  Always having a kind word for all. Modest and becoming.  Frugal and helpful.  Daily giving herself for the benefit of others.  A character that inspires others.  Unafraid to stand up for truth - even when the truth is hard or unpopular.  Ever seeking the help of God.  Strong -  because she finds strength in the One who never fails.
This is the Godly woman.  The woman I seek to become.
In a world that says a woman is her own master, able to do as she pleases, go where she wants to go, and be whoever she wants to be - no matter what that is - we, as daughters of the King MUST make a stand for Godliness.  When women desire to be more like men, they greatly degrade themselves.  Yes, we are called to submit to our fathers, husbands, etc.  We have a God-given position and we must be strong and wise enough to be what God intended.
In her series on “The Godly Woman”, Martha Montgomery gives us a helpful comparison of three related words:
"When the woman was in her unfallen state God appointed her to be subordinate to the man (Genesis 2:18). This was a matter of rank and did not imply any inferiority. It was an honorable position.  So we see, first, a woman is a subordinate.
After the woman had sinned, in her fallen state, God imposed subjection on her (Gen. 3:16). So second, a woman is in subjection.

In the New Testament the wife (or daughter) is enjoined to come into submission (Eph. 5:22-24) to her husband (or father).  Third, a woman is to be submissive.
The inner attitude is toward the subordination appointed and the subjection imposed in Genesis."
If you're interested in reading more about this subject, a great resource is So Much More by Anna Sophia and Elizabeth Botkin.
I know that this post isn't as fun and exciting as some others have been, however I have been thinking about it a lot lately and wanted to share my thoughts with you!  I hope and pray that this blesses, inspires, or encourages you to live the life of a Godly woman!
Revealed by Holly Lou at 2:54 PM

"For I know the plans I have for you, declares the Lord, plans to prosper you and not to harm you, plans to give you a hope and a future."

Holly Lou
My name is Holly, but you can call me Holly Lou :) I love God, music, photography, reading, and a good cup of coffee. Welcome to my blog!